We’ve seen solid-state drives (SSDs) replacing hard drives (HDDs) in PCs and laptops, but they aren’t always ideal for everyone. While flash memory chips are a lot faster than spinning platters, you can’t get anywhere near the same amount of storage space at the same prices. Some people are willing to make the tradeoff, but for power users, a combination of both is ideal.

The same holds true for external storage. While many people, especially laptop users, now own at least one portable hard drive, the same cannot be said for SSDs. A 500GB SSD could cost as much as a 4TB hard drive, making them niche products. Most people who only need to copy files now and then can just use a simple USB pen drive. You have to know exactly what your needs are in terms of speed, reliability, and capacity.

Portable SSDs are a relatively new product category, but there are still multiple different types, brands, and models in the market. We’ve scanned multiple online and offline retailers to get an idea of the current market scenario, and combined that with our experience with these products to bring you this shortlist.

The best portable SSD in India

Our pick is the Samsung SSD T5, which impressed us with its speed when we reviewed it earlier this year. Samsung is one of the world’s biggest flash memory producers and suppliers, and this is its third-generation product following the SSD T1 and SSD T3. Availability is consistent, and the device is fairly pocketable. You get 256-bit AES and up to 2TB of space.

In our test, the Samsung SSD T5 managed 551.9MBps sequential reads and 499.9MBps sequential writes. The 250GB and 500GB versions are likely to be the most popular, with street prices as low as Rs. 7,000 and Rs. 8,500 respectively, and they go on sale frequently.

The 1TB model will set you back by around Rs. 17,000 and the 2TB model is listed with a small number of retailers starting at around Rs. 34,000. Bear in mind that these prices fluctuate quite a lot, and you can get good deals through some online retailers.

If you use a high-end laptop or desktop with Thunderbolt 3 ports, you might want to consider an external storage device such as the Samsung SSD X5, which boasts of read and write speeds of up to 2800MBps and 2300MBps respectively. It will help you get your work done faster, and will be compatible with any PC with a USB Type-C port, though of course at much lower speeds.

Great for professionals who have Thunderbolt-equipped computers.

If speed isn’t your top concern, the G-Technology G-Drive Mobile SSD R-Series has a large, heavy body made of solid aluminium which acts as a heatsink and makes the device quite rugged. It’s designed to be noticed, but still has an IP67 rating for water and dust resistance and has been designed to withstand all kinds of abuse including being crushed and dropped. You also get a five-year warranty.

In our tests, this portable SSD managed sequential read and write speeds of 562.2MBps and 514.8MBps, which are pretty impressive figures. This drive promises USB 3.1 Gen2 (10Gbps) speed and comes preformatted for Macs, though it can be used with any kind of computer. It is fairly expensive though, with the 500GB version retailing for Rs. 11,999, the 1TB model for Rs. 27,499, and the 2TB model priced at Rs. 54,699.

Designed to be rugged, and performs well too. 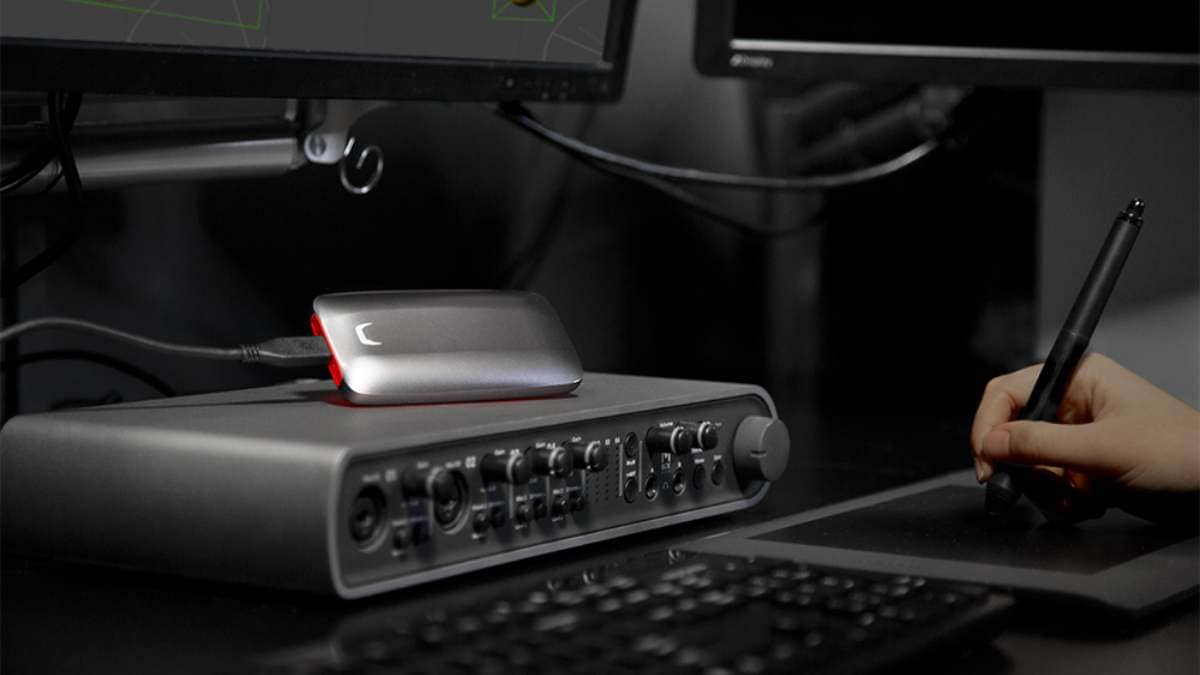 Several portable SSD models from less-known brands are available in the market, and there’s really nothing wrong with them. We’re highlighting the Adata SD700 and SD600Q, both of which are available in low capacities for low prices. The 240GB versions of each model sell for around Rs. 3,499 and Rs. 4,899 respectively. This is still expensive by hard drive standards, but a lot more approachable.

You’ll have to deal with the old Micro-USB 3.0 plug type and performance isn’t rated very high, but they’re still quick and functional. Interestingly, both are ruggedised with rubber bumpers. Both models boast of MIL-STD-810G toughness ratings, while the SD700 adds IP68 water and dust protection, which many premium models don’t offer.

Water and dust resistance at a great price.

What is a portable SSD?

Rather than storing data on a hard drive’s spinning magnetic platters, SSDs are completely electronic and use microchips that can hold multiple bits in miniscule cells made up of transistors. With no moving parts, SSDs can be much more compact and reliable than hard drives. They are also 3-4 times faster, and consume much less power.

While SSDs are becoming more and more common in laptops, prices are still a deterrent for a lot of people and they won’t replace hard drives entirely for a long time.

Who needs a portable SSD?

The market for such devices is pretty narrow because of their cost, but they offer specific benefits that could well be worth it for quite a few people. Most are extremely small and light, which is great for convenience. Some have awkward shapes, but they’ll still fit in a pocket.

SSDs incredibly fast, and that could make a big difference for people who work on large files such as video projects while in the field – for example, copying approximately 30GB of data onto a hard drive would take nearly 8 minutes, but that can be cut to under 2 minutes when using an SSD.

There are no mechanical parts to worry about, so shock, vibration, and drops aren’t issues at all. Compared to pen drives, they use superior quality memory and controllers, and are more resilient to damage or failure. Finally, they can be weatherproofed so that data is safe.

What should you look for when buying a portable SSD?

When it comes to choosing a portable SSD, you might immediately have a preference based on looks. Some of them, such as the WD My Passport SSD, are extremely stylish. Others, for example the Silicon Power Bolt B80, have interesting designs but aren’t the most practical. When considering how pocketable a drive is, do keep in mind that some come with small, stubby cables that are easier to carry around but not very practical in actual use.

Another thing that can help you quickly narrow down your options is ruggedness. Not all of the external SSDs currently available have IPxx ratings for protection against water and dust ingress. Some boast of additional qualifications such as shock resistance, crush resistance, or a wider range of operating temperatures. Do keep in mind that rugged styling is not necessarily an indication of actual reliability.

If your data is sensitive, you might want to consider data encryption in addition to physical resilience. A fair number of our options support 256-bit AES at the hardware level so you don’t have to worry about what happens if your drive gets lost or stolen. A three-year warranty is standard.

All portable SSDs use the USB 3.0 standard for data transfer, and nearly all of them are limited more by the SATA protocol used for storage. Most models are rated for sequential read and write speeds of between 450MBps and 550MBps. The sole exception is the high-end SanDisk Extreme 900 which promises up to 850MBps reads and writes, but is a lot bulkier and heavier than the rest and is priced at 35,990 for for 480GB. 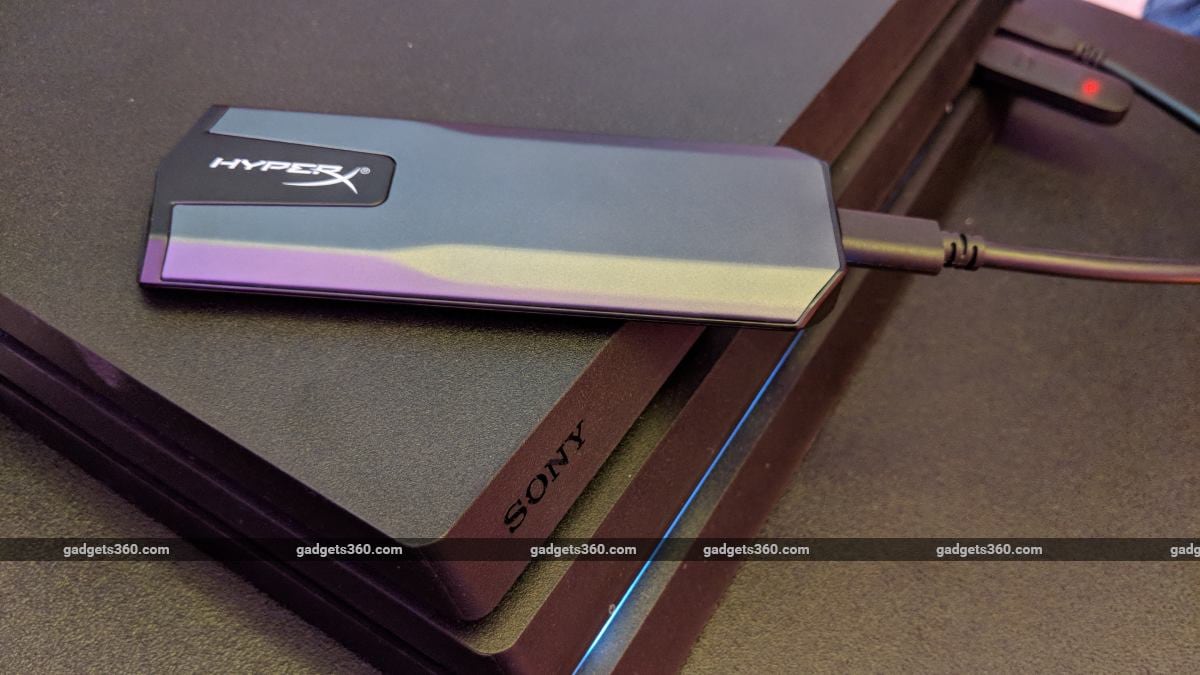 Do you need to buy any other accessories for backup?

As with all storage media, portable SSDs are susceptible to loss, theft, or physical damage. There’s also no guarantee that you can recover data that is accidentally deleted. We always recommend that people store their important data in multiple locations, preferably online as well as offline, and have a scheduled backup process in place. If you only have one copy of a critical file on your portable SSD, it is not a sufficient backup.

Depending on the laptop and/or PC you use, you might need an extra USB Type-C to Type-C or Type-A cable or adapter. You should also consider what kind of backup or mirroring software you use — several manufacturers include useful software for free, which you might want to consider when making your buying decisions.

How did we pick the best portable SSD?

Availability, price, and rated speeds were the primary parameters that we considered when evaluating portable SSDs in India. We also considered basic parameters such as size and weight, as well as features including hardware encryption, weather and shock resistance, and bundled software and accessories. We looked at models from Adata, G-Technology, HyperX, LaCie, Samsung, SanDisk, Seagate, Silicon Power, Sony, Transcend, and WD.

We’ve checked mainstream online stores as well as specialist PC hardware dealers, and found all the portable SSDs that are currently available in India. Many are from established brands such as WD and Seagate, which are trying to transition from spinning platters to hard drives. Many are also from Taiwanese companies such as Adata and Transcend, which are building on their expertise in the RAM and removable storage product categories. Some older models still sell as well, but we haven’t considered those.

If not a portable SSD, then what?

While performance in terms of the maximum rated read and write speeds is generally equivalent across the board, there are several models that do not have an IP rating for water and dust resistance, and also several that do not support hardware encryption. With a proliferation of simple and cheap 128GB USB pen drives, it makes sense for most manufacturers to target 250GB as the minimum capacity they sell.

The vast majority use USB Type-C, though this should not be conflated with the actual speed of the USB connection in use – almost always USB 3.0, which operates at 5Gbps. Even if a manufacturer uses the terms USB 3.1 or USB 3.2 for marketing, you’re not actually getting higher speed because those standards have incorporated USB 3.0, not replaced it.

Sony and G-Technology (a division of WD) stand out for targeting professional users with extra-rugged bodies, extended warranties, or capacities going up to 2TB. The SanDisk Extreme 900 is also distinct, for offering the highest rated speeds but also weighing over twice as much as all the other drives. HyperX, Kingston’s spinoff brand, recently introduced a gaming-centric model, the Savage Exo. All these options work just as well for all other purposes including basic data transfers and backups.

If you think a portable SSD is too expensive or doesn’t have enough space for you, a normal portable hard drive would probably make better sense. These are also preferable if your main requirement is a drive to back up your data to, because you get loads of space and you don’t really need super-quick data transfers. For those who don’t need a lot of space, a standard USB pen drive would offer decent speed and would also cost significantly less.

Finally, you have the choice of buying an internal SATA SSD (2.5-inch or M.2) and using it with an external USB enclosure. These are available online at relatively good prices, but they are usually unbranded and aren’t waterproof or shockproof, and after-sales support would be questionable at best.

Directly, which taps experts to train chatbots, raises $11M, closes out Series B at $51M

YouTube to Develop Its Own Interactive Shows and Live Specials, After...

April 10, 2019
We use cookies to ensure that we give you the best experience on our website. If you continue to use this site we will assume that you are happy with it.Ok